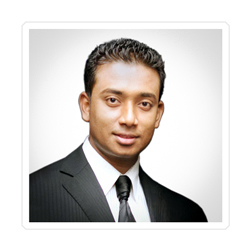 With a vast professional experience in the IT industry, Sachi Wickramage leads the way in the field with a knack for quality, and pursues a journey of constant improvement in everything he does. His passion for technology began at the age of 15 when he developed his first desktop application, simply from self-learning. This became a major hit among his peers in school which led to him doing constant research and development, to always find new ways of doing creative things. During his advanced levels, he was renowned in his Alma Mater for developing bespoke software which he distributed freely to his colleagues.

With the realization that IT is here to stay, his probing mind paved his path into appreciating continuous learning and be always on the lookout for new technologies, concepts and methodologies that supports developing Quality IT products and services. He therefore completed his Bachelor of Science Honours Degree in Management Information Systems at University College Dublin - National University of Ireland and his MBA with Distinction from Cardiff Metropolitan University UK.

IT therein was both his hobby and profession which he soon made it his career. This pushed him to achieving great heights as he didn’t have to worry about work life balance as there was only a thin line between. His IT career started as an MIS consultant to a reputed bank in Sri Lanka which he ended in 2006 to join the hSenid family as an HCI Engineer.

Being a professional IT all-rounder, he contributed Human Computer Interaction & Usability Engineering consultancy to hSenid Mobile Solutions previously known as BeyondM. He took reins of hSenid Outsourcing in the year 2009 and turned the company around to be a highly competitive, fast growing, potential rich endeavor. As the Head of hSenid Outsourcing he co-founded award winning mobile / wearable apps FlipBeats & Expense Tracker 2.0 and he envisages driving his team to be doing great things that will make their customers more competitive and delighted.